Sky Target 3D is SEGA's rather half-hearted attempt to modernize its arcade classic Afterburner for the 1990s. Nothing much to say about this game, other than the fact that it looks and plays like Afterburner, except the enemy planes and end-level bosses are now 3D, textured SVGA graphics instead of 2D EGA sprites. Like Afterburner, you basically fly across various landscapes, land, sea, and high up in the clouds. One thing Afterburner has that Sky Target 3D curiously omits is a throttle control and the ability to roll. There is also no real freedom to explore, and the game does run a bit like it is on rails (similar to Rebel Assault). Worse, the sharp SVGA graphics flickers quite a lot, and you will often see your aircraft pass through huge baddies once they come close enough (similar to "clipping" problem in FPS games).

To the game's credit, SEGA does try to give you more bang for the buck... at least at first glance. You have the ability to choose between several different jet fighters, all of which look different but ultimately handle the same, with exact same weapons. The levels and baddies are also much more varied this time around.

Overall, Sky Target 3D is a commendable attempt to improve Afterburner, and it works reasonably well, but most retro fans will probably choose Afterburner over this disappointing remake. Not really a bad game, but one that doesn't surpass its predecessor at all in the gameplay department. 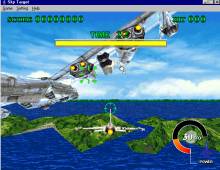