Star Quest I in the 27th Century

Star Quest 1 is a fun shareware space flight simulator that is much better than your average shareware game, although it's still nothing compared to Nomad or Elite, two heavyweights in the genre. In addition to putting you in pilot role, the game lets you give orders to a squadron of ultra-fast wingmen ships - similar to Wing Commander or Star Rangers. You can order the fleet to follow and protect you while you destroy hundreds of enemy ships, or tell them to engage enemies on their own.

One of the nice things about Star Quest 1 is that, like Elite, you can fly down from deep space into the planet's atmosphere, to hover over the planet's surface to blast a base protected by ground cannons. The missions are intense, with lots of enemy ships flying around everywhere, constantly bombarding you with laser fire. You also have to watch out for space mines, although you can also lay them in fields to protect your Star Cruisers.

The graphics of the game is quite good: planets and ships are 3D Gouraud-shaded, with a nice variety in design. The objects are texture-mapped, with real-time shading by sunlight - a nice touch. One of the best things about the game is the very wide range of ships and missions: you will engage enemies in deep space, air, and planetary surface, and there are over 60 different kinds of ships in total (although you cannot fly them all). Some missions also leave room for you to explore the area to plan your attack and strategy, and you can choose from 10 difficulty levels per mission. I found computer-wingmen in the game to be reasonably bright, in a sense that although they don't really help me much, they are still smart enough not to get killed first ;)

Overall, Star Quest 1 is entertaining as far as space action games go, but it just doesn't have the same staying power as Nomad or Elite. Maybe it was the weak (almost nonexistent) plot, maybe it was the repetitive ship design, or maybe it was the lack of innovation. Whatever it was, it's an average game that you will have fun with for a few hours, before going back to your favorite space combat game. 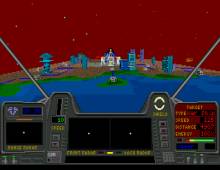 Star Quest I in the 27th Century screenshot