Stargate, later marketed as Defender II, is a little-known sequel to Defender. The game added a few elements to the Defender gameplay including the inviso, some new enemies, and the stargate. The stargate gave you a quick escape route, and allowed the really skilled player a chance to get huge bonus points by flying into the gate with humanoids in tow. If you manage to bring in more than four, you will warp four waves forward. The inviso makes you invisible for as long as you hold the button down (and as long as you have any left) and also allows you to destroy any enemy you fly through with no damage to you.

Although the gameplay remains as addictive as ever, I found Stargate harder to control than Defender. Doubtless this is due to the addition of new features like the inviso which require key presses to activate, but it still doesn't feel very intuitive. Keeping the keys pressed also gets tiresome after a while - but maybe I'm just not a good enough arcade player to feel accustomed to it. It is still arguably better than the old method in Defender which requires you to fly out of the playing field entirely to activate secondary weapons. If you enjoy the original, you will probably like this sequel too. It just doesn't grab me the way Defender does. Recommended. 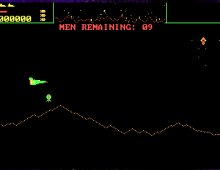