Star Goose is yet another (yes there are many of these games around) arcade space shooter game with simple gameplay and features. You don't have any options in the game so it's just to get started blowing up enemy spaceships and different vehicles. Sounds simple but why not since it has worked for other games.

The controls easy but there are several challenges on your way since the ground sometimes get higher so your spaceship also changes height a bit which makes the animation of the spaceship look different. You also have to stay inside certain areas as you will otherwise explode. This makes the game a bit hard to play (at least on faster computers) since you can barely notice this before it's too late. Another thing is that you can fly into different tunnels and collect extra items although it can also make it harder to get an overview where you are at on the level.

Overall an average space shooter game with nothing new to offer and there are really much better games around in this genre. I must admit I didn't get the chance to play many of the levels simply because of the very fast gameplay as I couldn't get a good overview of what I would encounter next in the game - but I doubt I missed anything.

A nice humoristic top-down shooter - you don't fly this time, but crawl on the floor. It's nothing THAT fantastic but it plays nicely. I had to slow the game down a bit. A batch-file with the setting and Moslo are included in the download. A nice unusual feature of this game are the bonus runs which are in 3D - you can fetch weapons and shields by racing through a tunnel and picking them up - nice idea.

Probably one of the most pirated games in computer history (right up there with California Dreams' Blockout), Stargoose is a cute little top-down shooter starring you as *cough* a futuristic goose. Aside from the usual assortment of enemy ships and ground-based defenses to shoot at, Stargoose features several neat ideas. In addition to shooting the baddies with your pea-shooter guns and your missiles, you must collect the 6 multicolored crystals to advance to the next stage. The bonus runs are not played from the top-down view but in 3D tunnels. These tunnels are the only places you can pick up new weapons and shields, without the nuisance of enemies. Overall, Stargoose provides good ol' fashioned shooter fun that should keep newbies happy, although veterans will find it too easy, too short, and a bit repetitive. The game is also notable for being one of the first 256-color VGA games ever made. 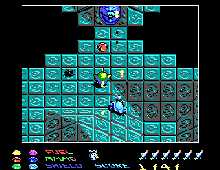