One of the most obscure 3D shoot 'em ups ever made for the PC, Star Fighter 3000 is a solid PC port of a hit RISC OS game of the same name originally designed by FedNet and ported by Krisalis. This PC version was publisbed by Telstar only in a few European countries. PC Zone's concise but quite accurate review says it all:

"[This game features] lots of texture-mapped polygon action and some intriguing visual effects (nice flares and smoke), although the depth of vision leaves a lot to be desired. With a joystick, it's not half bad - for about 20 minutes. Its console origins (it appeared first on the 3DO) sadly become apparent fairly early on: the gameplay is a tad basic to really cut it as a PC title. That said, if you're sick of keyboard overlays and fancy a quick bit of blasting, you could do far worse."

One of the innovative features about the game is the ability to order your wingmen to fly in formation, attack specific targets, and you can also fly new ships as their development is finished throughout the game. Unfortunately, pixellated graphics make the game look worse than the RISC OS version and the animations not as smooth. Overall, an above-average shooter that may be one of the best games on the RISC OS, but has been superseded by many better games on the PC since 1995. 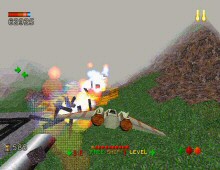