Spirit Warrior is a marginally above-average 3D fighting game from Taiwanese company CG. The game is very little known because it was never marketed outside Asia, and it never sold well inside the continent either. The best way to describe the game is Virtua Fighter PC, but with more choppy animations and less spectacular attack moves. The fighters are based on Eastern and Western myths and folklore, and their appearance looks much nicer than their attacks, which aren't that different from one another. Aside from good-looking SVGA background graphics, Spirit Warrior is a pretty standard 3D fighting game that plays just like another Virtua Fighter wannabe. Not recommended, unless you simply must collect every fighting game in existence ;) 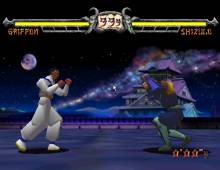