Space Hawk is a decent "caveflyer" multiplayer shooter inspired by Amiga classic Gravity Force. Formerly meant to be released as shareware, the game has been made freeware by the author.

The concept is simple: equip your ship with weapons, then battle other players to the death in various arenas. You can fight solo against computer-controlled ships, hot-seat in splitscreen mode against another human player, or multiplayer over LAN, cable, or the Internet. The graphics look very crisp in SVGA resolution, and the user interface is easy to use.

Unfortunately for all it has going for it, Space Hawk is just simply not as fun as classics in this niche genre. Perhaps it's due to the slightly higher-than-normal inertia (somehow I could never make my ship move as fast as I want), and too few weapons to choose from and too few differences between them. Still, if you enjoy caveflyers, you'll have at least a few minutes of fun with Space Hawk's great graphics and varied level designs - until you get bored and go back to the likes of AUTS and V-Wing. 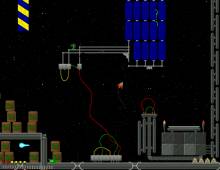