Lunar Jetman is a superb Windows conversion of the 1983 Spectrum classic of the same name, released by Ultimate Play the Game as sequel to their earlier hit Jetpac. Freestyle Freeware says it all about this neat game in an excellent review and gameplay overview:

"As with other RetroSpec remakes, Lunar Jetman has improved graphics and sound but the gameplay remains faithful to the original. As with the original release, Lunar Jetman's instructions are a little vague considering the complexity of the game. For this reason I've included a short gameplay guide below:

Essentially, the player's goal in Lunar Jetman is to destroy the alien base on each level. This can be done in either of two ways; (a) by 'bombing' the base, or (b) by shooting down the homing missile (launched from the base when the game time runs out). To bomb the base, the player must transport the 'bomb' (the spherical object marked with a 'B') to the base perimiter and drop it on the missile launcher from above. Unfortunately, Jetman only has a limited amount of fuel for his jetpack, so the bomb must be transported on the back of the Moon Rover to the base. However, the route to the alien base is littered with impassable craters that have to be filled by using the bridging units onboard the rover (press the 'pick up/drop' key when stood next to the vehicle and drop the unit in the crater to fill it). It should also be noted that if Jetman is hit by an alien while in the air, he will fall to the planet surface and leave a crater when he dies. However, the player is safe from the aliens when inside the Rover. If the player does not destroy the alien base before the game time runs out, a missile is launched from the base and will lock on to the Moon Rover. If the player does not shoot down the missile then the Rover will be destroyed and the game is over. However, if the player succeeds in destroying the missile then the level is completed and the next stage begins.

Finally, there are a couple of other objects that can be found on the planet's surface; teleporters that teleport Jetman from one location to another, and a gun turret that can be fitted on the back of the Rover. However, the Rover can only carry one item at a time - so the objects carried depend upon the player's chosen strategy. An essential download for anyone who has fond memories of the game, but newcomers should be made aware that Lunar Jetman is very difficult to master." 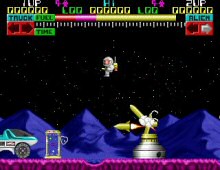