Moon Child is a fun but little-known 2D platform game that was sold in limited distribution by Dutch multimedia giant Valkieser in 1997. Billed as "oldskool gaming as it's meant to be," this 13-level game features a psychedelic finale level that is well worth the admission price. The plot, from the freeware PocketPC version: "One night, a small comet crashes into the peaceful scenery of the planet Utopia. Soon, the meteor proves to be the source of a rapidly spreading techno-virus, turning Utopia into a cold metal world. Centuries ago, Utopia's moon has sent a magical green elf to Utopia, to protect the planet from some unknown danger. But now the danger is known and Moon Child's time has come. It's up to the player to make sure Moon Child succeeds in his quest!"

The game comprises four large worlds, each split into four big levels except for the fourth and final world, which offers an impressive grand finale. One nice touch in Moon Child is that the design of each world communicates the spread of the techno-virus alluded to in the plot. Since the first world is not yet infected, it is an atmospheric world washed in nature. The second world tells you how fast the techno-virus is spreading: it is a decaying construction site. The third world has you fly through a techno-fortress with a jetpack, and finally the last world is a completely abstract and psychedelic world.

Like all good platformers, Moon Child is full of fun action, creative and varied enemies, and devious level designs. You will fight a wide range of enemies, from normal animals like birds, bats, and bees, to odd things like cannons, cement mixers, pneumatic hammers, robots, and the abstract amoeba-like creatures in the last world. Those who enjoy platform games definitely should take a look at this very little known, vastly underrated game from the same team that brought you Hoi on the Amiga. 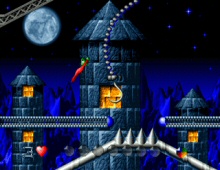