Revenge of the Mutant Camels

Revenge of the Mutant Camels is a great PC remake of classic Commodore 64/Spectrum game of the same name, released as shareware by the author in 1994 but has since been released into the public domain. Comments from the man Jeff "Yak" Minter himself: "Revenge of the Mutant Camels is probably the best known of the Mutant Camels series. I was feeling well guilty about the fact that the camels got shot up in AMC, as camels are in fact llovely beasties, so I made them the heroes of this game. At the time, people were freaking out about the fact that Manic Miner had 20 levels, which seemed like a huge amount back then - so I decided to oneup MM and put 42 levels into this game. I could have put more but 42 seemed like a decent number of levels, especially as 42 is the answer to life, the Universe and everything.

RMC was also technically significant, as it was one of the first UK C64 games to figure out how to use raster interrupts and the scroll registers to make a smoothly-scrolling zone on the screen. It was also one of the first games to use the Fast Load system - at the show where it was launched there was much amazement as we demonstrated the game loading in a mere 1.5 minutes instead of the 13-odd minutes it would have taken under Commodore's execrably-slow system. Commodore were always great at making things load slowly - in fact games could load faster off the so-called 'turbo' tapes than off a stock Commodore floppy! We held a hi-score competition for RMC on the day of launch, and took the winner off on the Concorde for a day-trip, to ride a real camel around the Pyramids. That was a lot of fun."

If you have played Attack of the Mutant Camels before (it is also on this site), you know what to expect here: plenty of weird and wacky enemies, addictive nonstop gameplay, and a unique brand of Yak humor that encompasses flying camels, crazy llamas that run at you on two hind legs, and more. The game is a lot of fun, but it is extremely challenging. If you enjoy arcade games in general, this highly underrated classic from one of the true pioneers in the genre is a must-play. 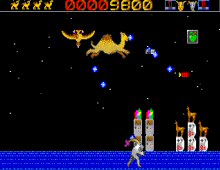 Revenge of the Mutant Camels screenshot