Space Fortress is a fun and unique action/simulation hybrid set in space. Your goal: "...defend your fortress as long as possible from enemies that endlessly increase in strength and numbers. This is much like an arcade game in that you are going for a high-score and nothing more, but also much like a simulation game since in the process of shooting down enemies you must allocate energy to the various systems on your fortress, assign damage control priorities, collect the powerups dropped by enemies, and deal with system failures as your different systems become damaged."

The game plays like a more sophisticated version of Missile Command, although you need more strategic planning and quick thinking skills than reflexes to succeed. You will spend most of your time allocating resources and issuing repair orders. While some reflexes are required in the action screen where you shoot down enemy ships, the computer targets them automatically and you can use homing weapons to lock on enemy ships (although these handy weapons are few and far between). Since you are in command of defense, your goal in the game is not to proceed from point A to B, but to last as long as possible. If you manage to get over 100 kills before you lose the game, you can consider yourself an expert.

With over 10 types of weapons, 30 types of enemies, 20 different systems (ranging from reactor, life support, cooling, and many more), cool particle effects, and excellent interface, Space Fortress is an addictive old game that will appeal to both fans of spaceship simulations who want something a bit simpler than Super Star Trek, and action fans who want something more sophisticated than a normal shooter. 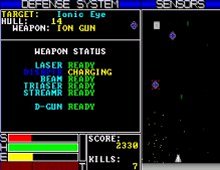