Probably one of the worst promotional games ever made, Sony Game is a quaint platformer starring everyone's favorite Walkman-- SONY's, of course. It's a typical platformer in every respect, except that from time to time you will find a SONY store in which you can browse the latest SONY Walkman models and their specifications. Being a Walkman (in the most literal sense of the word) is bad enough, but it's worse when you have to suffer through dozens of very repetitive levels and even more boring enemies (what can possibly be a Walkman's enemies, anyway?). Good for a few laugh or if you want to browse SONY's catalog in the most unusual way. Otherwise, it's really not worth anyone's time, and there are far better promotional games around. 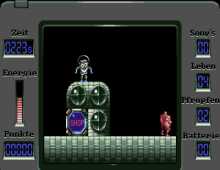