sion2000 is a neat 3D first-person space shooter from Japan. The objective is simple: shoot everything in sight. Although it's an arcade shooter, the control resembles a flight sim game in that pressing UP moves your ship down (i.e. "diving" down), and DOWN moves your ship upwards. Gameplay involves lining up the target crosshairs on the target, and fire when it turns green. The more you play, the more enemy ships will appear. Although the 3D graphics are not much more than polygons, their smooth animations do a good job of conveying space physics. You can also charge your weapon and collect power-ups to fire a more powerful blast. There are also many kinds of enemies and nice weapon effects. If you're looking for a fun shooter to spend 10-15 minute at a time with, sion2000 is a good choice. Recommended! 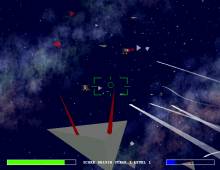