Sideswipe is another quality freeware offering from Natomic Studios. A fast-paced side-scroller, the game offers lots of frenetic action and enemies in crisp anime-style graphics. You play secret agent 053 who has just stolen a hoverbike from a lab. Your job: help him escape the premises and through the forest. The gameplay is standard: drive the hoverbike through level after level, while collecting coins, avoiding roadblocks and other obstacles, and destroy enemies by 'dashing' through them. One catch: you can only perform a dash when the dash meter in the top left of the screen is filled.

The gameplay is very smooth and fun, although the levels do get a bit repetitive after a while. There are several nice touches, such as the ability to customize paint job of your bike, secret areas, and a good original soundtrack. If you enjoy well-coded freeware gems that won't take you too long to finish and will serve as a pleasant diversion during coffee breaks, check out this fun, unassuming game. 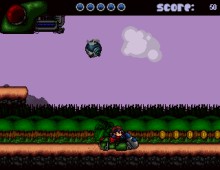