Streambolt is another excellent freeware release from Fallen Angel Industries, a group who develops all their games with Clickteam's excellent game-creating applications. A cross between Mega Man games and Konami's classic platformers, Streambolt harks back to the golden days of 8-bit gaming, and like a great NES game, will keep you occupied for hours on end.

The game's graphics already sets it apart from most freeware platformers: anime-style "boss" enemies, quality cutscenes, and detailed scenery are all very well drawn and animated. The gameplay is similarly well designed. You start the game with multiple abilities, a gun that can fire in 6 directions, and will acquire new abilities/weapons with each new stage. For example, you will get a jetpack in the first level, the shield in the second, and so on. This keeps the game from being repetitive, not least because each new ability/weapon you gain is necessary to beat the current level you are on. In addition, there are non-platform segments interspersed throughout the game to add variety to gameplay - even some arcade-style "puzzles" thrown in.

All in all, Streambolt is a very well polished, superb freeware action game that no fan of the genre should miss. I find the game too difficult and frenzied for my (almost nonexistent) skills, so beginners be warned. 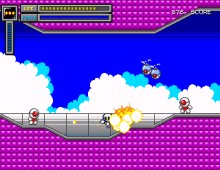