The Space Vegetables Corp. is a relatively rare but decent action game from MicroValue. The game is similar an older Commodore 64 game called Star Paws: as a space-age farmer, you have to protect your crop of vegetables from an endless onslaught of alien creatures. Despite drab graphics and lack of variety in backgrounds and gameplay, SVC is still a fun game that is better than Software Projects' Star Paws. This PC version was published in the U.S. by Villa Crespo, a company best known for a series of good gambling games. The Commodore 64 version exists and can be found on various websites, although it was never officially released (you can read more details at this page. All in all, a decent game holds no candle to the likes of Lunar Jetman, although not a bad game. 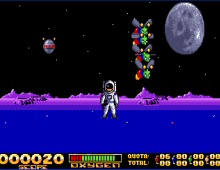