Sherman M4 is an oldie combat tank simulation by Loriciel. The game is set in a World War II scenario and offers most of the things you would expect from a game in this genre. Fairly decent solid-filled 3D graphics, three different campaigns to choose from playing in the Normandy, Ardennes and North Africa, and as in most other tank sims you have control over multiple tanks - up to four. A solid sim, however lacking in realism and playability quite a bit compared to games like Microprose's M1 Tank Platoon. D. Arnaud, one of the main designers of this game, continued later on to produce Advanced Destroyer Simulator one year later. Both games are fairly similar in game design and layout. 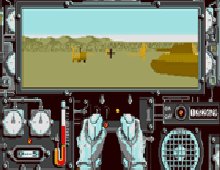