World War II. Pacific. The Americans and Japanese are fighting for domination of the seas. You have just been recruited and the days of glory are ahead of You...

One of the best flight games I've ever played. You'll fly the P-38 airplane based on the US aircraft carrier. Your missions are pretty simple but VERY difficult to accomplish. You'll have to destroy all the enemy bases and ships in the vicinity and that is very, very, very, very, very hard to do. It is almost 100% realistic and it might take You a couple of hours to destroy everything. If only those Zeros are not around... The dogfights with Japanese pilots are very tough as well. Complete game is pretty detailed. I mean the game details. For example: to destroy enemy ship You have to drop a torpedo. But...it has to be done from a real low flight. Otherwise torpedo will crash in to the sea and sink. Of course, it is possible that Your torpedo gets destroyed by the enemy gunfire, so You'll have to go back to Your carrier and get another one.

Wings of Fury is a fun, albeit repetitive, action/simulation game in the style of old side-scrolling classic Sopwith. You fly an F6F Hellcat fighter, and your task is to escort a damaged aircraft carrier to Allied shores. After launching from the carrier, you will shoot your machine guns, torpedoes, and bombs at the Japanese fighters. You will also have to sink enemy ships.

The game is a lot of fun, mostly owing to ease of controls, decent graphics, and no-nonsense action. The game has some nods to realism, in that you must land on the carrier to reload your guns or refuel your tank from time to time. In contrast to earlier (e.g. Apple II) versions, you can even save game whenever you are on the carrier. The plane is easy to control, and downing one enemy plane after another is strangely addictive.

Unfortunately, Wings of Fury suffers from the same weakness as Sopwith: lack of longevity. The game becomes boring once you play it for a few hours, because there are only five missions in total-- mission six is the same as mission one, but with more enemy planes, so on and so forth. Launching off the aircraft carrier is also quite frustrating, especially to beginners (you will not be able to launch your plane without using slowdown programs for this one). It's still a great game, but only for the few minutes or hours that it will take you to see all five missions. Top dog, with some reservations. 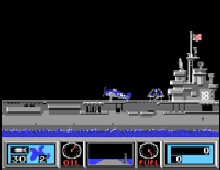 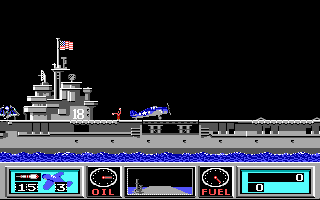