A fast, fun, unassuming little side-scrolling freeware shooter. You are a new sheriff in town, and your job is to track down the notorious gunslinger who's been causing trouble in these parts. The game is played from a side-scrolling perspective, and the gameplay is as simple as it gets: use mouse to talk to people and choose your answer, left and right arrow keys to move around, up arrow to draw your gun, and ENTER to fire it. You can also ride a horse, and tell it to it run while you are busy firing at gangsters. Despite the cliche premise and simplistic gameplay, Sheriff is a lot of fun-- it's fast, it's smooth, and it's got plenty of charm. Don't be put off by EGA graphics and tiny pixel characters -- you will soon learn to love them like I did ;) A great coffee-break title, and well worth a look. 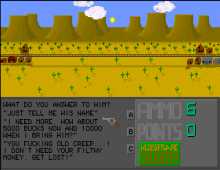 People who downloaded this game have also downloaded:
Legend of Billy The Kid, The, Town Hall Toaster, Shufflepuck Cafe, Tintin in Tibet, Tintin: Prisoners of The Sun