Seawolf is a decent BASIC game released by IPCO, the first PC publication, way back in 1982. You are the captain of a submarine who is given one minute to try and destroy as many PT boats, submarines, and oil tankers as possible. Seawolf uses ASCII characters for its "graphics," but they are surprisingly adequate for the gameplay. The torpedo sight is at the bottom of the screen and you can fire one torpedo at a time at the enemy ships which zip past at the top of the screen at varying speeds. If you like Missile Command-style arcade games, you might enjoy this competently coded oldie that unfortunately doesn't stand the test of time very well - mostly because its primitive, simplistic gameplay has been done many times better - before and after its existence. Worth a look for nostalgia/historical value, but not at all as a classic game. 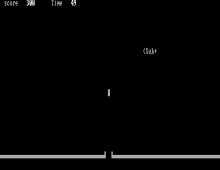