S.T.O.R.M. is a horrendous 3D underwater action game developed by ASC Games back when they were known as American Softworks. Your goal in this sci-fi action fest is simple: kill everything in sight by piloting a futuristic submarine called S.T.O.R.M.. Decent graphics and plenty of weapons can't save the game from mediocrity. The levels all look the same, with very little to liven up the drab blue of background graphics, and the enemies are ridiculously easy to kill. I can't think of any redeeming value in this game at all - especially when there are far better games of the same type: Sub Culture and Subwar 2050 comes to mind. 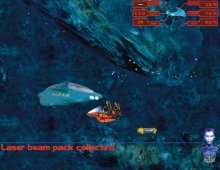