One of the very few games from subLOGIC that are not flight simulators, Night Mission Pinball is a surprisingly playable, realistic, and highly customizable pinball game. Set with the backdrop of an airport at night, the best thing about Night Mission Pinball is the amazing range of parameters the game allows you to tweak. You can change the spin of the ball, the force of the bumpers, and even the table tilt. Everything you can change has an impact in the game: lower the tilt significantly, for example, and the result will be like watching a film in slow motion. As flight sim fans know, subLOGIC is famous for accurate flight models in its sims, and Night Mission Pinball is no exception. Pinball fans will have a lot of fun with this game, although it's disappointing that only one table is included.

Note: this download is version 3.0, released in 1988 after the first version in 1982. This version adds numerous improvements, including EGA graphics, high scores table, and a better physics model. It's no small wonder that such a fun game could be packed in less than 50KB of space. 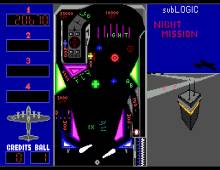