Search & Destroy and Up! Periscope are two early submarine sims have a lot in common even though they were produced by publishers who lived thousands of miles across: Search & Destroy was designed and released in the U.S. while Up Periscope! was released in Europe. Both are excellent submarine simulations although Search and Destroy had a more action-oriented focus than its cousin. Up Periscope! is better in terms of realistic feel, game interface, and has more interesting missions. 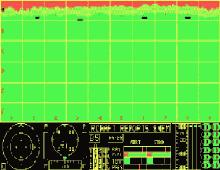