Although billed as an action game, Charlie Chaplin is not just a plain jump-and-run, but a very original game than is quite enjoyable. Your task is to create and edit a slapstick movie by acting as the king of deadpan humor, Charlie Chaplin himself in different action scenes. Once you are happy with the result, you can put the whole film on a public screening, and then see what the critics have to say and how much it made at the box office. If you make enough money (the game unfortunately isn't always clear about just *how much* is required), you can go on and do another film, if not... well, it's back to the drawing board. Overall, a very unique and entertaining game, although obscure goals, awkward controls, and black-and-white color palette (no doubt to simulate actual Chaplin films) may turn some people off. Anyone who likes unique platform games, or want to start in their own films will probably enjoy it, though. 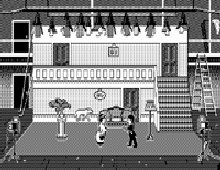