Sea Dragon is a fun but very difficult underwater shooter from Adventure International. The basic premise is similiar to such arcade hits as Scramble: you are going through a maze of underwater tunnels, trying to get to the reactor at the end in order to blow it up. You control the submarine, and you have to shoot and dodge your way through the obstacles and enemies. Once you get to the reactor, you have to dodge fire from two indestructable turrets, while blasting through a stationary triangular wall, and then a moving rectangular one.

Your submarine is armed with an unlimited supply of torpedoes, but you can only have two torpedoes launched on the screen at any time. The game is more sophisticated than it looks: you must surface periodically to replenish air supply, or else you will die from suffocation. Since surfacing is not always possible due to underwater caverns and other obstacles, you must plan ahead to have enough air.

Sea Dragon is divided into six distinct sections, each more difficult than the last, and each requiring a different strategy. The first section is a sea bottom dotted with ominous black mines. The next scene is a cavern filled not only with mines but also indestructible gun turrets that fire a stream of bullets. Sections three and four are also seascape and a cave, respectively, but you have destroyers and lasers firing at you. The last two sections are extremely difficult to gain access to and have even more sophisticated weapons and obstacles.

Sea Dragon is a lot of fun, but not recommended for arcade beginners or anyone with a low tolerance for frustration. This is definitely one of the most difficult shooting games I have played, and although I don't consider myself an "expert" at this kind of games, it is still fairly obvious to see when companies make their games very challenging on purpose. The game is tough because the submarine responds a little too slowly (underwater inertia?) and you cannot fire downward.

Overall, though, Sea Dragon is a solid shooter that is both challenging and interesting - but arcade beginners need not apply due to high difficulty level that cannot be toned down. 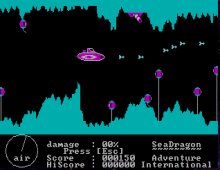