Another cool promotional gem from prolific developer E-Game, this time sponsored by SAS, premier Scandinavian airline. True to its sponsor's nature of business, SAS Baggage Claim puts you in the role of baggage claim clerk at a nondescript Scandinavian airport. Planes from 4 Scandinavian countries have arrived, and conveyor belts are now moving. Every piece of luggage is tagged with its country's flag, and your job is to put the right luggage on the right baggage carousel (one for each country). Put the luggage on the wrong carousel one too many times (eight, to be exact), and it's game over. You can get extra points by collecting untagged luggage, such as stray pieces of clothing, which are delivered to the lost & found area automatically. There are five levels in the game, each new one harder than the last. True to the game's promotional nature, you will learn all about SAS' wonderful new flight reservation services between levels ;)

With great graphics and fun, simple gameplay that the company is known for, SAS Baggage Claim is another entertaining gem from E-Game. You can even post your high scores on E-Game's website, although the promotional period for this particular game is long gone. 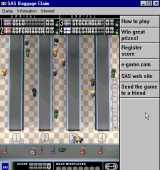