Saboteur 2 is a fun beat 'em up game from Durell, a sequel to the first Saboteur which was released only on non-PC 8-bit systems including the ZX Spectrum computer. You play a mercenary "Saboteur Ninja" in the game who must finish different missions inside an enemy fortress. The diversity of missions is the best part of the game - they range from retrieving a document, to assassinations, to disabling a space shuttle) and ones that require frontal attacks.

As the name implies, stealth is key to success in most missions. This means you won't be facing an onslaught of enemies in this game, but the ones you do face are quite difficult to beat. Enemy ninjas always show up to ruin your day, and trained animals like tigers can make your job much more difficult. There's a wide range of weapons you can find and use in the game (why Ninjas in these games have to _find_ weapons as opposed to come prepared always puzzles me - oh well, best not to ruin any suspension of disbelief ;)) The controls are not very intuitive and the animations not as fluid as Jordan Mechner's early classic Karateka, but they are adequate by 1987 standards. If you like beat 'em ups, Saboteur 2 will surprise you with its wonderful range of missions and innovative focus on stealth. 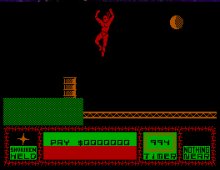 People who downloaded this game have also downloaded:
Manic Miner, Jet Set Willy, River Raid Remake, Out of This World (a.k.a. Another World), Ghosts'n Goblins