Manic Miner and Jet Set Willy are without a doubt the two BEST games ever made for the Sinclair Spectrum computer in mid-1980s. Designed by Matthew Smith and published by Bug Byte / Software Projects, these incredibly addictive platform action/adventure games are grandaddies of today?s platform genre. Both games star Miner Willy, intrepid explorer who must explore 20 caverns in pursuit of treasures in Manic Miner, then clean up his own huge mansion (built from the fortunes he collected in those caverns) in Jet Set Willy.

In Manic Miner, you have to collect all the items from the cavern you are currently in, to get to the next cavern (level). You must hurry, though, as the oxygen keeps running out. Jet Set Willy makes the game much more fun with the addition of more varied locales (e.g. rooftop of your mansion, and the beach) and strange loonies who are out to ruin your day. Your task this time is to collect a given number of objects strewn about each of the mansion?s rooms before Maria, your housekeeper, will let you go to bed. The games play much better than they sound, with very clever level design, user-friendly interface, and a seemingly endless variety of objects to collect and surprises to discover. PC gamers now have a chance to try out these Spectrum classics for the first time, thanks to Andy Noble's exceptional conversion of the Spectrum originals. If you wonder where platformers come from, look no further than these 1983/1984 classics. Must-haves!

A fan-made remake of the most famous Spectrum classic! Manic Miner is one of the first, true platform games. Placing you in boots of Willy the miner, the game offers you hours of gameplay, but you need to be incredibly patient and skilled to pass the few first levels, not to mention how hard it is to complete the whole game!

So what are you doing actually? Willy discovered ancient mines of some old, superior civilization. Although the mines have been long abandoned, the machines are still working and are extracting valuable metals. Willy saw a good opportunity of getting rich and the adventure begins. To complete a level, you have to collect all valuable items in each room. You will have to jump a lot, climb stairs, avoid hundreds of hostile creatures and machines and, of course, collect items. As I said, the game is extremely hard and will require a lot of nerves to be completed. 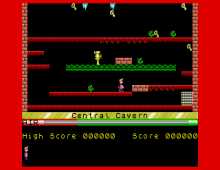