This is the excellent PC remake of Jet Set Willy II, a good sequel to the classic Spectrum game that is unfortunately not as fun to play as the original The game is more or less the same as the predecessor (read my review of Jet Set Willy PC remake for detail), but with more of everything: Willy's mansion is much bigger than the original, and there are more objects and obstacles. The plot is more or less the same: Willy has had another colossal party and (of course) Maria has gone on strike again. As Willy, you cannot go to bed until you collect all the glasses for a second time.

Despite the bigger mansion, Jet Set Willy II lacks the charm of the original -- probably due to the fact that most of the "new" locations (except the wacky "Final Frontier" towards the end of the game) are more or less the same as the old ones, and there is little in the way of new concepts in gameplay. Seeing Willy in a space suit near the end is worth the wait, though, so die-hard Willy fans would probably plough through this one patiently. 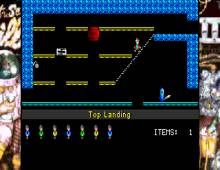