Runner is a fun freeware arcade game from Japan. Your objective as a stick-man "Runner" is to destroy all enemies on the level to proceed to the next. The graphics are sparse, but the gameplay is excellent. The best thing about the game is the numerous types of enemies, each with its own type of attack. Some enemies will shoot at you, while others will try to run into you. You can choose from 4 difficulty levels find one for your skill level; the difficulty level affects the number of enemies you must kill, and the number and placement of obstacles on the screen. You shoot the enemies with CTRL key, and use the arrow keys to move. The game is quite challenging even on the easiest level, because extra lives are few and far between (you start with 4 lives), and higher levels have not only more enemies but also more obstacles that block your path.

The only major gripe I have with the game is that the controls are hard to get the hang of. Contrary to typical arcade controls, pressing UP does *not* move your character upward. Instead, the UP key is used in conjunction with the LEFT and RIGHT arrow keys to either rotate the runner more quickly or make him run faster. It took me more than a few tries to get the hang of the controls, but afterwards I was hooked. If you love the frantic gameplay of Robotron: 2084, check out this fun little old game that could occupy you longer than you realize ;) 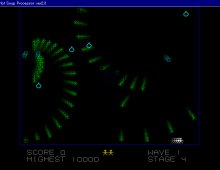