One of the more unique beat'em up games you'll find, Rumble Box is a fun little game from Patrick Hackett and Joe Bourrie, two graduates of DigiPen Institute of Technology. In the authors' words: "[the game] is a fast paced 3D action beat-em-up with a unique premise: all of the characters are made of simple objects which stay around in the level even after the character is defeated. The objects pile up, changing the gameplay landscape and altering your combat tactics. The game takes place inside a giant box, and the ultimate goal of the game is to pile up enough defeated enemies to get out of the box."

Although the game may look confusing judging from the screenshot, smooth animations and clever use of colors to differentiate living and dead guys make Rumble Box much more addictive than the screenshot suggests. Enemies you kill blow up in cool cartoon-y "BOOM" animations befor disintegrating into component blocks. The cubic fighter you control can perform a lot of neat moves, ranging from simple punches to a "flying superman punch." There are also bonus stages where you have to dodge raining bombs or kill as many enemies as possible to rack up a large bonus. If you enjoy polygon-base classics like 4-D Boxing or innovative fighting games in particular, chek out this neat little game that is as underrated as they come. Highly recommended. 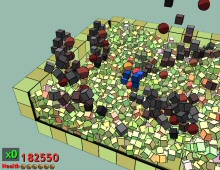