RRootage and Noiz2sa are two unique and addictive vertical shooters that breath fresh air into the crowded, clone-proned genre of arcade shooters. What sets both games apart from other shooters are two very innovative design choices: cool abstract graphics, and pitting you against only 'boss' enemy ships without hordes of other ships in the way.

The games are essentially vertical one-screen shooter in which you have to destroy increasingly tougher bosses while avoiding a staggering amount of enemy fire that seems to come from all directions. Once you kill a boss, the enemy re-spawns with tougher armor and shoots even denser barrage at you. The graphics in both games is very slick - abstract, vector-based graphics similar to Tempest but prettier and more crisp in SVGA resolution. You can choose from the different fire patterns and/or difficulty levels, and the 'bare-bones' nature of the games mean they are practically infinitely replayable, even if they seem repetitive at first glance. There are many bonus items you can collect to increase your score, but there are no power-ups in the games.

Last but not least is the soundtrack. In contrast to most freeware shooters whose music is absent or unmemorable, the music in rRootage and Noiz2sa are excellent, especially considering the freeware status. One thing that would have been nice is the option to switch the action to horizontal mode, but as it stands they are already very fun, addictive, and slick shooters that fans of the genre should definitely take a look. 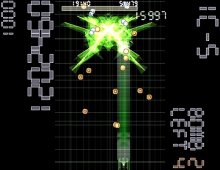