Rocket Ranger is Cinemaware's excellent adaptation of the old "Flash Gordon" comics in which you must stop the Nazis from conquering the world with your trusty rocket pack. Those who expects a good mix of strategy and action typical of Cinamaware games will be disappointed, as Rocket Ranger's strategic element is reduced to a simple matter of selecting the right coordinates and time to refuel. Regardless, as a pure action game it is definitely one of the best, with waves after waves of relentless Nazis coming at you from every direction. The third-person pseudo-3D action sequences in the air are easily some of the most memorable sequences in a Cinemaware game. 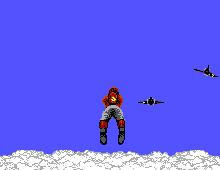