Rocket Lander is a good - but very rare - conversion of the hit arcade game Lunar Lander. From Mobygames' description: "The object of the game is to land a space craft on the landing pad while avoiding the mountainous terrain. This is accomplished by adjusting the thrust and tilting the rocket left or right so your rate of descent is slow enough to land safely. The rocket crashes if the rate of descent is too fast, or the misses the landing pad. After reaching 100 points, advanced mode begins which features more difficult terrain."

Like most early games from the Big Blue, Rocket Lander is competently coded, offers plenty of replay value, and is quite addictive. Unlike Alley Cat, though, the game doesn't have a built-in timer, so make sure you download and install a slowdown program (read our FAQ for details) to avoid immediate crash :-) Highly recommended! 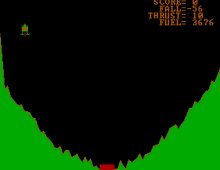