Raging Skies is a great 360-degree shooter from Darthlupi, maker of Mage Craft. Although it is basically a straightforward top-down shooter as far as gameplay goes, numerous touches such as the addition of a world map, fun cut scenes, and cool bombing runs give the game a lot of atmosphere and elevate it above most freeware shooters. You play Cliffton Spoon, a bounty hunter who is trying to make his mark in a future Earth. With your trusty futuristic airplane-cum-spaceship, you will engage in numerous dogfights against the evil "Talon Lords" and their squadron.

Raging Skies reminds me a lot of shareware classic Zone 66 - which can only be a good thing. Similar to that game, you can move 360 degrees in Raging Skies, and enemies will come at you from all directions. Money can be collected from defeated enemies to buy weapons and part upgrades for your ship, and I really like how this game offers some degree of "freedom of movement" that makes it feel less linear: from the "world map," you can choose where your next battle will be, by flying to the sector. This way, you can conduct "bombing runs" to procure more cash for better weapons.

There are 4 worlds in the game, each new one offering a higher degree of challenge. Cut scenes are interspersed throughout the game to advance the story, and the graphics is very crisp and well-drawn, giving the game a strong "retro" feel. Music also deserves mention as being very pleasant, and the user interface is intuitive and fluid. I usually am very bad at shooters, but the difficulty in Raging Skies feels just about right: not so easy that players would feel bored, and not so hard that players would give up in frustration. My only gripe would be that the game feels a bit too short, but that is definitely partly because I had so much fun. Highly recommended to every shooter fan. 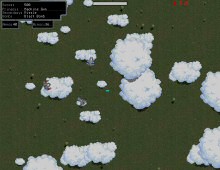 People who downloaded this game have also downloaded:
Raiden II, If It Moves, Shoot It!, Ikari Warriors, Star Rangers