Restraint of Zero (R.O.Z. for short) is another excellent, very polished shooter from Japan's rapidly growing freeware scene. Similar to huge 3D shooters like Idinaloq and Die Slave (which you can also download from this site), R.O.Z. features detailed 3D graphics, cool weapon and explosion effects, large levels, and story-based gameplay. Although most missions are played from a vertical perspective, there are many horizontally oriented levels to enliven the challenge. There is plenty of nice touches throughout the game. For example, when you move left and right, your ship will 'roll' left and right in 3D motion. Weapon effects are colorful, and the enemies are very good looking - especially the 'boss' ships which are appropriately huge and menacing.

As good as the game is, R.O.Z. is not for everyone. More precisely: 'newbies' need not apply. It took me numerous tries just to get past the first few screens because I had a hard time dodging bullets (and the fact that the spaceship I control is bigger than in most games doesn't help, either). Granted, the ultra-fast speed of the game (on my 1.4GHz Pentium anyway) probably had to do with this, but then I couldn't find the option to slow it down, so it still was very difficult. But even the difficulty level doesn't detract from the fun, since you will have so much fun ogling at wonderful ship designs and cool 3D effects in R.O.Z. to notice how many times you need to restart the level. 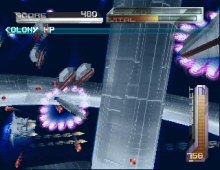 Restraint of Zero (a.k.a. R.O.Z.) screenshot