Yet another fun freeware shooter from Japan?apparently a very prolific and lively community for action game developers. Reflection has no plot to speak of, or even twists to the age-old shoot-everything-in-sight concept. What it does offer, however, is a lot of knuckle-blistering gameplay that arcade fans are familiar with. I was a bit disappointed at the lack of creative enemy types?after all, how many military helicopters/planes must we shoot to find something new? Still, the end-level bosses are tough to beat even if they?re not original. There is only a few types of power-ups, the best of which is a shield that can reflect enemy fire. Overall, a nice, pleasant little shooter that shouldn?t take any expert too long to finish. A long shot from classics such as Raptor, but much better than your average amateur shooters. 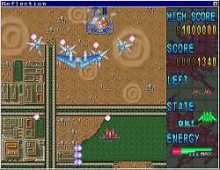