Rebel Runner is a decent platformer from Korea that offers good value for money but is marred by awkward controls and choppy animation. The plot is entirely optional, so there's no need to go into the story. Suffice it to say that you are the hero tasked with rescuing your planet from certain destruction at the hands of invading aliens.

The gameplay is standard: fight hordes of enemies in 2D side-scrolling perspective. You can hurl laser blasts from your hand, and use a Sonic-style close attack. Although you don't need ammo for your hand laser, the game adds a clever touch here by tying the laser to your life energy. Continuous firing of the weapon leaves you more vulnerable to attack. Although the close attack doesn't cost energy, it is not as effective as an energy blast. Therefore, a big part of the game is balancing your energy use with keeping enough energy to protect you from attacks. Luckily, you can replenish energy by collecting blobs of energy dropped by each creature you kill. The game has over 16 levels of action, and quite a good variety: at one point, for example, you will get to ride a dragon that used to be a boss monster in the previous level.

Unfortunately, Rebel Runner is marred by many bugs and quirks. The controls are far from precise - sometimes your hero will make long leaps seemingly for no reason, and inexplicably the "UP" arrow key moves him forward instead of makes him jump. There is no way to reconfigure the controls, so you have to get used to this decidedly annoying interface. I also ran into several bugs in the game or at least bad coding. Sometimes the enemy creatures will get "stuck" between obstacles on the level, and sometimes they will overlap each other. If you enjoy platform games, you might find Rebel Runner entertaining for the first few minutes. Finishing the game, however, requires a lot of tolerance and forgiveness of its many quirks. 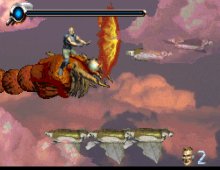