The Year is 2219. The place, Earth. Alien beings from the Secilia System have arrived in our solar system. Their objective, is to obliterate and take over the Earth with their Battle Cruisers, Mechs and Fighter Crafts. Only you and fellow pilots on the R-Gray Advanced Fighter stand in their way. Thus begins the saga of RayStorm, Taito's sequel to RayForce.

This rare PC port of RayStorm is very faithful to the original arcade version, which came out only in Japanese arcades in 1996. The graphics are excellent: 16-bit 3D graphics presented in an isometric/overhead view of the action. Every ship in the game is painstakingly modelled from 3D polygons, and fans of 'mecha' style (e.g. Macross series) will be delighted by the sleek ship designs in the game.

There are two types fighters you can choose at the beginning of the game: R-Gray 1 and R-Gray 9. The ships carry different weapons; the R-Gray 9 is more suitable for veteran players as it allows a maximum of 16 target lock-on lasers. There are 8 levels of frantic action, all of which are well-designed and a beauty to behold. Huge bosses, nonstop attacks, spectacular explosions (especially when bosses die), and awesome special weapon set RayStorm apart from avarage shooters. The way you power up the special weapon is quite unique: the only way to recharge special weapon is by killing more enemies - the more enemies you destroy, the faster the 'special' bar goes up.

If you are a shooter fan, RayStorm is an excellent addition to your collection. Be warned, though, that the high difficulty level may be very frustrating if you are a novice gamer. The sheer number of enemy ships and nonstop barrage of enemy fire in the later levels means that only expert gamers may be able to finish the game. But if you consider yourself a veteran for this kind of games, you will find RayStorm a worthy and worthwhile challenge. Highly recommended. 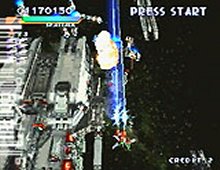