Galax and Radias for Windows 95 are two fun shooters from Japan's prolific freeware gaming 'scene.' Galax is a vertical shooter that boasts crisp anime-style graphics and fun power-ups, while Radias for Windows 95 is a competent fanmade remake of a 2D side-scroller of the same name which was made for NEC's PC-9801 computer way back in 1994. Both games boast big levels, smooth graphics, nonstop waves of assorted enemy ships, and a good diversity of weapons you can pick up. One gripe I have with both games is that designs of 'boss' monsters are a bit too unimaginative: they don't vary that much from level to level. If you like anime-style shooters, they are both well worth your time, although they may prove too difficult if you don't consider yourself an expert in action games. The graphics in Radias looks a bit dated, but that is due to the author's intention to make the game as authentic as the original. 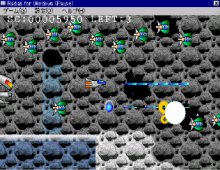