Quiver is a fun shareware FPS that makes up for the lack of multiplayer support with a great sense of humor, some innovative weapons, and huge levels. The plot is nothing you haven't seen before in DOOM games: aliens have stolen some orbs that allow them to transport to the past, so your mission is to infiltrate their bases and recover these orbs.

One of the game's best features is the nice weapons that are different from the pistol/shotgun/machine guns of most DOOM clones. Some of the weapons you can use are alien weapons, such as the "shredder," which shoots a spiked mine that explodes in a 360-degree arc of fireballs, and the "hell-hands" which shoots a powerful stream of fire but only while you are spinning in circle. The game has the usual abundance of power-ups, including health, ammo, keys, and of course the orbs that you need to exit each level.

The controls in Quiver are either mouse- or keyboard-driven, neither of which can be reconfigured to your liking. Fortunately, the default controls are not unintuitive, so it only takes a few minutes to get used to them. You must also master the art of precise jumping to succeed in the game.

Overall, Quiver is a fun shareware FPS that doesn't challenge DOOM or Strife for the crown, but then again it is not designed to. If you enjoy unassuming FPS with plenty of levels and furious action, 27 challenging levels of Quiver will keep you occupied for some time. Recommended! 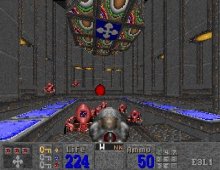