Quazatron is a great remake of Hewson's unique action/puzzle game that is widely considered one of the best 8-bit games of the era - and one of the many gems that never made it to the PC. Similar to Paradroid, Quazatron centers around a droid called KLP-2, aka Klepto, who is assigned to deactivate the armies of hostile alien droids that inhabit the underground city of Quazatron.

The gameplay is easy to learn, but with enough variety and even strategic elements to keep it refreshing. Although the graphics are very different, the lift sequence and grapple screen are almost identical to Paradroid. As Klepto, you disable the droids either by blasting them, pushing them off their programmed routes, ramming them (if you are strong enough), or by 'grappling' them - a unique process by which you take over the grappled droid's mind - much like in Paradroid.

Matt Smith brought the fun of Quazatron to new life on PC screen with SVGA graphics, smooth 3D/isometric view, and all the addictive gameplay that Spectrum and C64 fans know and love. You will be glued at the monitor for hours on end, thinking about how to kill the next pesky droid that comes along. Like the original, the levels in Quazatron are very detailed and get progressively harder as you go on. Definitely a must-play for every Paradroid fan, or fans of unique action/puzzle games in general. 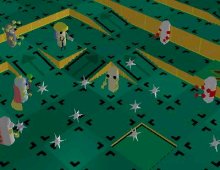