One of the most unique and fun platformers I have ever come across, Obake is a fun Japanese platformer that plays like what Messiah would probably be without the third dimension, religious/sci-fi overtones, and 'real-world' graphics. The gameplay is similar to Nintendo's Kirby console games, which allow you to use the enemies' skills once you defeat them. The (rather thin) plot: you play a young ghost named Obake Kid ("ghost kid") who must stop his father, the ghost king who has gone berserk.

Although you play a ghost in this game, you do take damage from various enemies, and contrary to logic, can only hop around similar to Mario. On the other hand, you can 'possess' the bodies of enemies, of which there are over 20 types ranging from little robots to mutant pigs. What makes Obake a lot of fun is the wide variety of skills you gain while possessing enemies. You can climb walls, glide over the ground, become invincible for a short while, and even walk on ceilings. The enemies also give the game considerable 'puzzle' element: specific abilities are required to pass certain spots, and part of the challenge lies in figuring out what you need. And while you can possess enemies, you can only do that temporarily: once the possessed's energy bar falls to zero, you revert back to your vulnerable ghost form.

Another area in which Obake shines is the sheer number and diversity of levels. There are 50 levels in all, divided into worlds of various shapes and styles, each with its own set of unique enemies, navigation styles (some worlds force you to go in one direction, while others allow you move horizontally and vertically at your leisure), and even puzzle elements. For instance, the castle world requires you to find keys to open different doors. Each world features classic console-style end-level "boss" that are appropriately hard to beat, although unfortunately they resemble each other too much. Last but not least, the game contains a lot of secrets. If you can collect all the hidden "G" icons in the game, for example, you can unlock the final eight levels.

Originally released as a WinXP game that requires Japanese language installed, the download here is "patched" to work on non-Japanese systems without Japanese language support, thanks to Gamehippo.com user rste79. Unfortunately, the patch may fail to work on Windows 98 systems, so if you use Win98 and the game fails to run, you are out of luck. For WinXP action gamers, though, this little gem from Japan is well worth the time. As an added bonus, the game is also fairly easy: I don't consider myself an "expert" at action games, and yet I was able to beat this game in a few sittings, enjoying every minute of it. If you are looking for a crisp-looking, smoothly animated, anime-style platformer that is unique to boot, check out this freeware game. 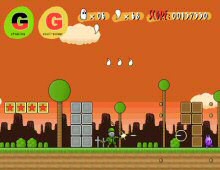