Pyros' Mobile Miners is a decent attempt at revamping the classic 2-player tank combat game Tunneler for the modern day. It doesn't quite succeed in retaining the addictive gameplay, but it's still worthy of mention. Essentially instead of plain-looking tanks, you now control two combat vehicles equipped with sharp vibrating digging spikes. You can earn money to purchase various weapons available, including machine guns, landmine dispencers, cannons, nukes, and more.

There are some changes to the basic gameplay of Tunneler that makes it more interesting... although unfortunately also easier. For example, your base now has no walls, so you can't camp in there to get the home advantage of re-fueling and repairing. Another change is that everything now costs fuel, even firing the weapon. That's why you need to get your personal engineer to fill you up and repair your Mobile Miner... But his life is very frigle, and if you let him get hit, you'll have to do without him. Strategically placed land mines, and effective usage of different weapons add welcome strategic element to the basic seek-and-destroy gameplay of Tunneler. Worth a try for Tunneler fans, although I feel that the game just doesn't have that "addictive" atmosphere for some reason. 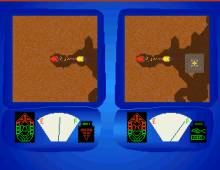