Project: Firestart is one of the earliest "cinematic action/adventure" games that successfully bring the thrill of an action movie to the computer screen. Designed by Damon Slye of Dynamix and published by Electronic Arts, it was one of Dynamix' early games that was never ported to the PC. Which is a real shame, because the game is much better than Dynamix' similar games like David Wolf that were ported to the PC.

"The basic plot is as follows: Communication with the space station Prometheus has been lost. You, as the hero, have been chosen to investigate. Sounds simple enough, right? But there's a lot going on aboard Prometheus, and you're in for quite an adventure... This is where you come in. You are a guy in a nifty black suit with green stripes and a pretty hefty laser. Your job is to fly up to Prometheus in your shuttle, get on board, and retreive any logs or other evidence of what happened to the crew.

The first thing you notice as you board the station is a man with his arm ripped off, who has scrawled the word "DANGER" in his own blood on the wall. Undaunted, our hero presses onward into the depths of the space station, determined to discover just what the danger is. As it turns out, Prometheus was involved in a special genetic research program, the goal of which was to breed a race of creatures that could withstand the extreme conditions required for mining ore from asteroids in deep space. Something went horribly wrong, and the creatures mutated, gaining the ability to reproduce, escaping onto the ship, and slaughtering most of the people on board.

Your job, then, is to find a way to destroy these creatures before they can get loose into the universe, then to escape from the space station alive. The shuttle you arrived in is conveniently destroyed during your adventure (as part of one of a few interesting subplots), so you'll have to find another way out. Replay value is high - in addition to the subplots, which have numerous conclusions depending on how you approach them, there are several different end sequences, depending on how well you completed your mission. You are treated to a couple of rather bloody cut-scenes as part of each one, and depending on what you do, you get a slightly different end sequence. Along the way, while reading scientific journals and logs, and discovering new methods of defeating the creatures, there is also plenty of good-old-fashioned laser-blasting as you run down the corridors of Prometheus, encountering more of the ugly green creatures at every turn.

The memorable thing about Project: Firestart is the atmosphere. Creatures will appear out of nowhere, cut-scenes, while few, are very well-done, and violence and gore abounds. More than once, as a young boy playing this game, I found myself saying "I can't believe they put that in a video game!" Even so, the violence is not excessive, and the story is quite gripping. Replayability is high, as you will find different ways to win the game, and different subquests that you may or may not choose to complete. And, as always, finding new and interesting ways to die can also add to the fun. 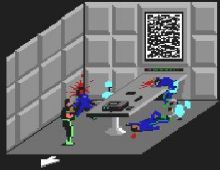