Prince of Evil is an excellent VGA beat 'em up from prolific Taiwanese developer Softstar based on Chinese myths. You control a legendary hero as he battles countless Chinese ghosts, monsters, and other supernatural creatures on his way to vanquish the prince of evil in the game's title. The standard kill-everything-that-moves gameplay is enlivened by a nice variety of weapons and power-ups you can save for use later, all of them based on Chinese myths/beliefs; for example, ginseng is used to increase your hit points, and your default weapon is the mystical fire that shamans casts to vanquish supernatural beings. You will come across ammo, treasure, and quest items throughout the game. True to Softstar's reputation, the graphics are colorful, the animations fluid, and the gameplay fun. Seeing creatures in Chinese myths come to life is one of the best things about this little-known old game from Taiwan. Highly recommended! 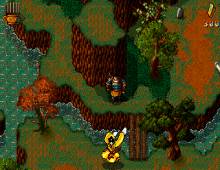 People who downloaded this game have also downloaded:
Prince of Persia, Vampire, Return of Egypt, Super Mario Pac, House of the Dead 2, The