Postman Pat 3 is a lackluster conversion of a lackluster Amstrad CPC/Atari ST game of the same name, which concludes the Postman Pat series that started out quite promisingly in 1988. The series is based on the exploits of Postman Pat, Britain's famous postman in a TV series who delivers packages, letters and local gossip in his hometown, always with loyal white cat by his side.

In the game you are (of course) Postman Pat, driving around in your red van to deliver mail to people's houses. Your task, similar to Paperboy, is to deliver all these mail within a given time limit. The game is played from a semi-isometric/overhead perspective, with bright graphics and a decent user interface. The problem is that the game gives you no clue of where the person lives, so you have to drive around town -often more than once—to find the correct location. Along the way, you have to dodge the roadworks as well as reckless drivers who drive on the wrong side of the road, going at 60mph or faster. You'll also need to stop at the garage to fill up the van with petrol once in a while.

The problem with Postman Pat 3 is that the game gets repetitive very quickly. On the easy mode, all the hazards are in the same place, so it's just a question of memorizing when they occur. Replay it enough, and the game poses no challenge whatsoever. On the hard mode, the game becomes more challenging, but without any variety to liven up the boring gameplay. The graphics are colorful, but the tune isn't up to the same standard as the one in the original game on the Amstrad. Only die-hard fans of the TV series will probably enjoy the game, but even then for a few minutes before its slow pace and lack of gameplay variety reduces the fun to zero. If you are interested in driving/delivery action, play Paperboy instead of this average old game. 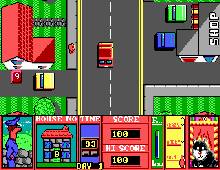