Pickaxe Pete! from Philips is a very addictive Donkey Kong variety of 2D climbing games. Originally released for Philip's own Videopac console system, the description from the manual says it all about this game:

"As Pete, you start out in the center of a multi-tiered mine - not at the bottom - and your boulder-smashing pick axe begins to deteriorate after about one minute. Then you either have to jump over or duck under the onslaught of falling rocks, or you're toast. Falling to the lower levels won't kill you, if you time it just right so as not to land right in the middle of an avalanche. When two boulders collide, they can uncover treasures such as a fresh pick axe or, more importantly, a key to the next level.

As you progress through the levels, one horizontal space is deleted somewhere on the screen at random, progressing on until you have a death-trap of open space where rocks can bounce right up into your face. Far from your typical arcade adaptation, you can get further in this game by short stretches of furious action when you've got an axe to grind and then waiting patiently for the key to the next level to arrive."

Like other arcade classics, it's hard to say exactly what makes Pickaxe Pete! so addictive. It can't be the graphics, because it's as basic as it gets (but by 1982 standards it was well above average). Maybe it's the thrill of furiously smashing as many rocks as you can before your axe deteriorates. The rocks never stop coming, so both dexterity and good timing are required to succeed. To me, the game has the same charm as other arcade classics like Kangaroo or Invaders: that "just one more level" feel. Definitely a very underrated classic. 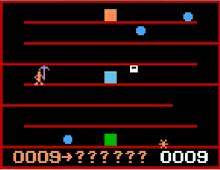