Over Horizon from developer HOT-B is one of the most underrated shoot 'em ups on the NES console. Reminiscent of R-Type in many ways, Over Horizon introduces many neat features to the crowded genre, such as speed-up of your ship, the ability to fire from the front AND back, and configurable power-up styles and placement - complete with a "test mode" to let you test your new designs. This good review at Flyingomelette.com elaborates why every SHMUP fan should play this game:

"Over Horizon falls into the category of "generic shooter story": One little ship vs. some huge alien army. However, I give it a few points because OH executes it well. There are no generic-looking enemies. Everything is very creative, although there is some obvious inspiration from Gradius 3, such as the desert level and some of the big ship bosses. There's also a cool little surprise twist at one point in the game, but I don't want to reveal anything. :) One area that is a good example of how this game shows off its atmosphere is the final level, where you can see the explosions of a battle going on far in the background. But, like all shooters, it isn't a game that you play for the plot.

Somebody finally answered my prayers and gave us a sidescrolling shooter without speed-ups! Hooray! The ship in Over Horizon only has one very comfortable speed, which means that control is near-perfect. Dodging around the assorted obstacles on the screen has never been easier to control. OH also has an innovative quality in the fact that your ship can shoot both forwards and backwards (but not both at the same time.) Pressing both A and B at the same time will make your options spread out. Pressing both again will draw them back in. The only minor nitpick I have with the control is that sometimes it's a little too touchy in narrow passages.

Over Horizon offers a very decent, and very fair challenge to shmup fans. One thing that I find most pleasing about OH is that the game relies more on memorization of enemy locations and attack patterns then it does on powering up to the max and blowing through everything with ease. A good example of the game's creative design is in Level 2, where you must shoot at switches to open and close gates. Some will open while others will close, so you have to move quickly to get through. Another example is in Level 3, where you must shoot at huge blocks of ice to move them around, and then weave in-between them to get through. The bosses all present a unique challenge. Although one minor flaw may be the excessively long time it takes to beat some of them, which can be tedious, especially the final boss. I don't think the game becomes overly difficult until Level 5, which is about twice as hard as Levels 1-4 put together. There are 6 levels, altogether, and 5 is definitely the most difficult because of the unpredictable bubble enemies that crowd the screen and the waterfalls that push your ship downward. When you die, you restart at the point you left off. But if you lose all your ships and have to continue, you'll start at the very beginning of the last stage you were on. This can be a bit frustrating in Levels 5 and 6, which have multiple sections and bosses. Overall, it's a decent challenge, but it could've increased a bit more gradually, and some of the bosses could've been made a little less tedious.

Over Horizon is certainly one of the better shmups I've played on the NES. The levels are long and varied, and each presents a new kind of challenge. OH also features a unique weapon edit mode. In this mode, you can change how your options will be positioned, and you can alter the effective power of the special weapons. It doesn't add a whole lot to the gameplay, but it is an interesting feature. I've played many shooters in which the whole idea was to power up to the max, then stay back as far as possible, shooting at anything that appears on-screen. Thankfully, Over Horizon's play is much more innovative. Even when fully powered-up, your ship is never overwhelming to the enemy forces. Sometimes, you'll have to decide what enemies to shoot and what enemies to dodge. Rather than just stay back at the left, you will need to dodge around the entire screen quite a bit to avoid obstacles, enemies, and enemy bullets. The bosses and mini-bosses are varied, and require different strategies for each. There's one mini-boss that you'll have to chase down a tunnel, and the screen scrolls very fast! Some bosses require you to circle around them or get behind them and shoot backwards to damage them.

Over Horizon is a solid entry into the shooter genre, and it's a real shame that it was never actually released in North America. There is a PAL version in Europe [as well as a Japanese version]. The graphics, especially the bosses, are good, the music is excellent, the control is near-perfect, and the game has some innovative challenges. The only thing missing is a tougher second quest." 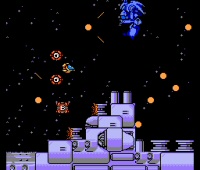