The second and one of the last releases from Freeform Interactive, a promising freeware developing arm of Ingava.com, one of the best freeware sites that folded in mid-2001. Rocket Download has the skinny on this fun Command & Conquer-style shooter:

"Outbound is a fabulous freeware game that features full mechanized combat. This overhead shoot-em 'up is sort of an arcade version of MechWarrior. You'll take your beefed-up Armored Mobile Vehicle (AMV) to eight different planets, each with unique environments and missions. As soon as you land, you'll engage swarms of enemy bots and fulfill your objectives. In some scenarios you'll have to destroy bases, substations and rescue marooned allies. The action climaxes on the planet Gateway, where you blow up the enemy's main battle station and hastily return to your dropship.

Outbound is a lot simpler than most mech games, so don't expect a highly sophisticated "simulation." Rather than worrying about building and maintain your bot, the game lavishly focuses on seek-and-destroy gameplay. You use your keyboard to control the AMV, and the number keys to toggle your weapons. Throughout your missions, you can pick up a variety of power-ups and bonuses. In the heat of battle, you can deploy guided missiles and pulse cannons to destroy the enemy. Use the on-screen map to locate targets as well as to identify friendly units.

Outbound is not complicated, but it's quite difficult to play. Its limited control system requires you to use the arrow keys to move your AMV. Though you can use combinations, it's hard to move diagonally when being attacked. It may take a couple of missions before you have full mastery of your bot." Highly recommended for mech and action fans alike. 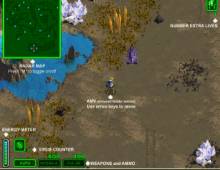